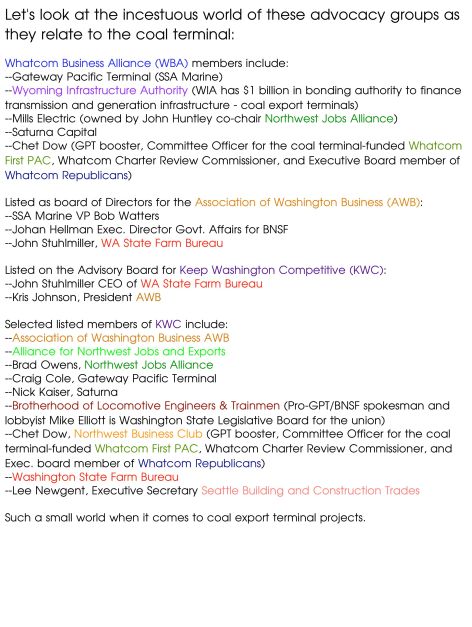 This post was first intended to be in response to a comment made by Wendy Harris [on Whatcom Hawk Facebook] about Washington Farm Bureau President John Stuhlmiller who was one of the panelists at the June 22 pro-GPT panel forum. Then as I started writing, it took on a life of itself that was far too lengthy for a comment on a post. Might be too lengthy for a post too, but I think the information is important.
Here it goes. . .

Stuhlmiller criticized the DOE’s decision on requiring a broad environmental review for both the GPT and Longview coal terminal in this July 2013 media statement attributed to him:

Statement from the Washington Farm Bureau
“What’s being requested by the Department of Ecology moves us into uncharted territory – reviews like this associated with port terminal developments have never been proposed anywhere in the country. It could have a chilling effect on Eastern Washington and agriculture communities that use our state’s rail system and port facilities to move our products to market.”

Professor of International Business at WWU Steven Globerman, was commissioned by the WA State Farm Bureau to produce a report on the economic implications of the Gateway Pacific and the MBTL (Longview WA) coal export terminals to other industries. That report advocated the supposed importance of both proposed coal export terminals.

In his report, Globerman said WA state can take advantage of unfolding economic opportunities such as increased tax revenues. However, he failed to include in that scenario the fact that BNSF will only be paying for 5% of the rail infrastructure and upgrades needed such as overpasses, etc. The rest, 95%, will be borne by taxpayers. So, the tax revenues that Globerman considers an opportunity will not even offset the huge costs of these needed rail overpasses and crossings. An overpass can cost from $20 million to $75 million.

Globerman’s report has been used in numerous advertising pieces regarding the GPT project. He is one of several WWU professors and staff who have let themselves be used in advocacy for GPT.

Nick Kaiser, Co-Founder and Chairman of Saturna Capital (Bellingham), established an endowment creating the Kaiser Professorship in International Business at the College of Business and Economics at WWU.

Nick Kaiser’s company Saturna contributed $3,500 to the coal-funded SAVEWhatcom PAC in 2013. He also donated $6,400 to the Whatcom County Republicans in 2013. In the 2013 Whatcom County election, the SAVEWhatcom/Whatcom First affiliated PAC’s and the Whatcom Republican’s focus was on attempting to get a slate of four conservative County Council candidates elected who were thought most likely to approve the permit/s needed for the proposed GPT. The council is one of the decision makers on the GPT permit/s.

Hart Hodges, Director of the Center for Business and Economics Research at WWU, was a panelist at the WBA-hosted June 22, 2015 forum. Hodges and the CBER were commissioned by the WBA in 2014 to prepare a report regarding the economic impact from the businesses in the Cherry Point industrial area. That report continues to be used by SSA Marine and the WBA to advocate for the GPT project.

Along with SSA Marine’s marketing mechanism the Northwest Jobs Alliance, a business/industry advocacy group called Keep Washington Competitive (KWC), sponsored the WBA-hosted June 22 panel forum. KWC is designed to target the scope of the EISs for the proposed MBTL and GPT coal terminals, target environmental regulations, and attempt to limit environmental review scope and duration. KWC is closely associated with the Association for Washington Business (AWB), and a press conference was held on February 3, 2014, at the AWB’s office in Olympia, announcing the new group. AWB has been a very strong advocate for GPT.

Former WA Attorney General Rob McKenna announced the launching of KWC in Feb 2014 on his smartergovernmentwa website. His website affords him a platform to try to discredit Governor Inslee and his administration, attack environmental regulations, and give himself a presence while he likely is waiting to run for office. In November 2013, Rob McKenna, working for Orrick law firm, prepared formal joint comments for the EIS scoping process for MBTL on behalf of Montana and North Dakota. McKenna challenged Washington’s constitutional right to require a broad review of impacts of the coal export terminals.

KWC and the Whatcom Business Alliance had co-sponsored a pro-Gateway Pacific Terminal forum back on September 17, 2014. A group of demonstrators in a non-violent direct action, disrupted the forum showing their opposition to GPT. That is probably why Tony Larson’s WBA kept the recent June 22 pro-GPT panel forum location secret from the public. Back in September 2014, SSA Marine/GPT had sent out a September 16, 2014 promotional piece via its email list which advertised the KWC/WBA’s June 17 pro-GPT forum at Mt. Baker.

Let’s look at the incestuous world of these advocacy groups as they relate to the coal terminal:

Such a small world when it comes to coal export terminal projects.