“The Gateway Terminal is the right project for the right time for Whatcom County. We need it and I support it.”

As we head into the primary elections, I decided to re-visit some of my older articles and comment posts to remind people why Gary Jensen should not be elected for Bellingham Port Commissioner. . .or for any other elected office.

Today’s reason:
That quote above from Mayor Jensen was from a February 20, 2011, print advertisement featured in The Bellingham Herald. Gary Jensen, as a sitting mayor, has allowed himself to be used in advertising by a corporation (SSA Marine) wanting to build and operate Gateway Pacific Terminal, a 48 million ton per year coal export terminal proposed at Cherry Point. 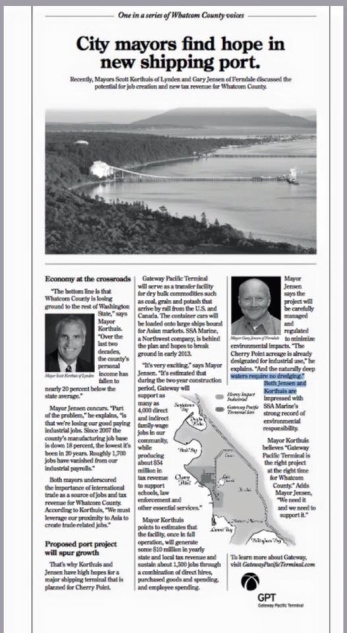 Public records obtained from the city of Ferndale, show that Ferndale Mayor Gary Jensen, along with Lynden Mayor Scott Korthuis, was sent a February 15, 2011 email from Gary Smith, a partner at Smith & Stark, a Seattle-based public affairs and strategic communications firm hired by SSA Marine, the company wanting to build and operate the Gateway Pacific coal terminal. SSA Marine’s local consultant/spokesperson for the GPT project, Craig Cole, was Cc’d on that email. 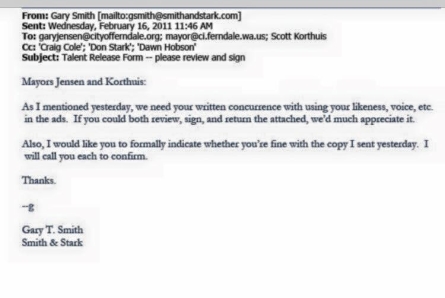 Both Mayor Jensen and Mayor Korthuis also gave their approval, allowing Smith & Stark, along with Copacino + Fujikado, a Seattle-based advertising agency working in tandem with Smith & Stark, to use the mayors’ likenesses, photographs, and voices in advertising for SSA Marine’s GPT project.

According to the copy for the radio ad that featured mayors Jensen and Korthuis, after each of them spoke a couple of lines in support of GPT, the script for the announcer in the radio spot read, “Both mayors support SSA Marine and its plans for the Gateway Pacific Terminal at Cherry Point: A major export facility that will ship commodities to Asian markets—creating hundreds of permanent jobs and generating millions in new taxes for the region. Without harm to the shoreline or environment.”

So, Mayor Gary Jensen who is a candidate running for Bellingham Port Commissioner,
let himself go on record for supporting the GPT project in an ad that claimed there would be no “harm to the shoreline or environment” from GPT.

How can he have let that happen? I believe it’s impossible to support the claim that a 48 million ton per year coal export terminal would cause no “harm to the shoreline or environment”?

If anyone wants to read my complete article (from Dec. 2014) which includes the information above, it can be found here: