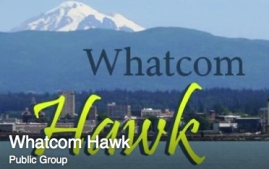 And in news that no one seems to be talking about, the Port is working 24/7 excavating sediment from the Whatcom Waterway, removing dangerous levels of mercury, PCBs, dioxin, etc as part of the waterfront cleanup. That is the good news.

The bad news is that I live nearby and can sometimes smell an odor, am experiencing an increase in dust, and most disturbingly, there is frequently a smoky plume that arises from the work site and spreads out like a rain cloud across the sky. (If you look at the area right now, it is hard to see, but earlier this evening, it was quite visible.)

Anyone care to venture what is in that cloud? I am just going to guess that it is nothing good. So my question is, why is no one monitoring the air quality from this project? And posting it somewhere for public review so folks like me can decide if we need to relocate from the area while this is going on.

And let us not forget that this is happening at the same time that Encogen is releasing its own toxic plume and the F street station leaves engines running all night while the oil trains, and their diesel particulates, have greatly increased.

Remember, our greatest health risk is from air pollution and yet it is the form of pollution that we are the least concerned with, and the least likely to monitor and control. It seems rather irresponsible to allow a 24/7 MTCA site dredging project to continue on for months without strict analysis and regulation of discharges into the air.