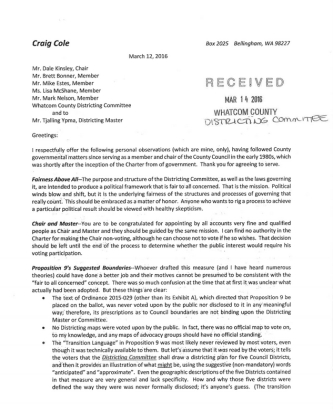 The Whatcom County Districting Committee met for the sixth time on Monday March 14, 2016 to continue their work in creating a plan for five new voting districts for Whatcom County Council Elections.  There are four voting members on the committee, two Democrats, Lisa McShane and Mike Estes, and two Republicans, Brett Bonner and Mark Nelson, along with one non-voting chair, Dale Kinsley, and a districting master, Tjalling Ypma.  April 6, 2016 is the next committee meeting that will be held at 6 p.m. in the Whatcom County Council Chambers.  The public will then have a chance to deliver their input at a public hearing held on April 13, 2016, also in the county council chambers at 6 p.m.

Craig Cole, who is Gateway Pacific Terminal (GPT) paid spokesperson for the proposed Cherry Point mega coal terminal project, and Director of the Northwest Jobs Alliance (NWJA), sent a letter offering his “personal observations” about the current districting process that was delivered to districting committee members right before the March 14, noon meeting began. Cole offered his perspective on topics such as fairness of the structures and processes of governing, Proposition 9’s (“Five Fair and Equal Districts”) suggested boundaries, transition language provided in the November 2015 election voters’ pamphlet, the validity of Deputy Prosecuting Attorney Karen Frakes role in advising the districting committee, and the question of what would happen if the committee members could not agree on a final district plan.

Whatcom County has been able to witness Craig Cole as the voice of the Gateway Pacific Terminal promoting the coal export project in emails to local government and business leaders, newspaper articles, and editorials in print since 2010.  Additionally, through the vehicle of the Northwest Jobs Alliance that he directs, there have been letters submitted to government representatives and a steady stream of newsletters have been released. In NWJA’s quest to promote the growth of fossil fuel industry at Cherry Point, most of its material challenges, in numerous ways, Lummi Nation’s right to a government-to-government relationship with elected officials.

Meanwhile, make note that during the November 2015 Whatcom County election where voters approved Proposition 9 “Five Fair and Equal Districts”, the Clear Ballot Choices (Pacific Interntional Terminals LLC) ballot committee was funded predominately by GPT project applicant Pacific International Terminals. Clear Ballot Choices (Pacific International Terminals LLC) revised its C1pc form in October 2015, to state that it was supporting Proposition 1 (for district voting), and also opposing Proposition 9 (“Five Fair and Equal Districts”).  Now GPT spokesperson and NWJA Director Cole is offering observations about the districting process through a lens that he says is his only.  The question is:  is it really possible for Cole or anyone else to unweave the fibers of coal-interest-funded identity from his March 14, 2016 letter to the Whatcom County Districting Committee?  To quote Mr. Cole, “Anyone who wants to rig a process to achieve a particular political result should be viewed with healthy skepticism.”