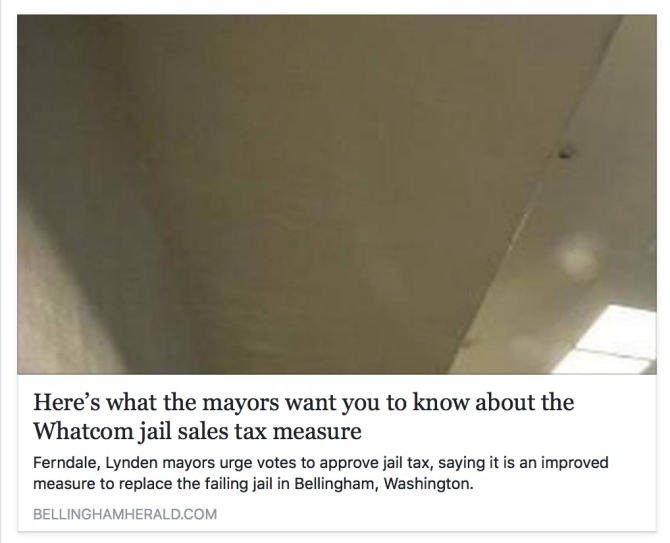 It is infuriating that small city Mayors Mutchler and Korthuis are using mental health services and diversion programs to sell the jail sales tax to voters in this op-ed in the Bellingham Herald, when they were supporting the Jail Facility Finance and Use Agreement with no assurances of monies for these.

In their op-ed they said: “This is a vastly improved plan from 2015. It funds operations, medical beds, mental-health treatment and incarceration-prevention programming along with jail construction.”

What the mayors are calling the “vastly improved” nature of the 2017 JFFUA plan happened at the 11th hour and by the work of Bellingham City Council and County Council Members on the Memorandum of Agreement (MOA). Before, provisions for these services were just listed as a policy in the agreement. Funds were not dedicated. Still, now that we have the MOA, the huge construction and operating costs of a prison-like facility overshadow those monies by far. We need to reverse that distribution of monies.

The mayors also say: “Everyone agrees the current space is dangerous for employees, inmates and we are only one faulty lock away from a tragedy.” This is a very deceptive argument for the mayors to use to tout the jail sales tax because the County Executive and County Facilities Manager have promoted at least incremental renovations to our existing jail facility that would happen potentially early next year and would include replacing all detention cell doors and detention hardware. No new jail sales tax needed.

Paying for a larger facility than is necessary has just as much potential to waste money as a yearly raise in construction costs. Meanwhile, our county is liable every day that goes by that we don’t pay to bring the the existing jail fully up to code. Being sued for an avoidable tragedy in the jail could cost us untold millions in legal fees.