Today a sponsored Facebook ad came into my feed from candidate for Port of Bellingham Commission, Dan Robbins, via his “Vote Dan Robbins” campaign page.

Robbins is running against Port candidate Michael Shepard, whose background garnered him an endorsement by the Washington Conservation Voters, which supports environmentally responsible candidates who their organization expects to be environmental champions that will protect and restore Washington’s environment.

Robbin’s sponsored Facebook ad announced an endorsement for him from NorthwestCitizen, a local online political blog. The ad post linked to an election opinion piece written by NorthwestCitizen Editor John Servais. A quote from Servais’ piece was featured at the top of Robbins’ post:

“If, like myself, you are a strong believer in environmental considerations in all government decisions, you can vote for Dan Robbins with a clear conscience.”

My first thought was, “How can John Servais, make such a statement with a clear conscience”?

During an October 19, 2017, candidate forum held at Meridian High School, in response to a question about state and federal environmental laws and rules, Robbins said that those laws and rules are “overreaching,” and that “it’s overburdened” and “too excessive.”

Those statements by Robbins are just one example of his inability to recognize the value of strong environmental protections.

It did not surprise me that Servais would overlook Robbins’ weak stance on the environment, because during the 2013 Port of Bellingham Commissioner District 3 race, he was willing to overlook the 4+ years track record of Gateway Pacific coal terminal advocacy by then-Mayor of Ferndale, Gary Jensen, who was a candidate for Port of Bellingham District 3 at that time, and who Servais endorsed.

• According to Robbins’ campaigns’ filings with the PDC, in the 2013 Port of Bellingham Commission District 1 race, he received the benefit of over $3,613.02 in Independent Expenditure advertising from the pro-Gateway Pacific Terminal coal-funded Whatcom First PAC (an affiliated PAC with the other pro-Gateway Pacific Terminal coal-funded SaveWhatcom PAC).

• According to PDC filings, during the 2013 Whatcom County elections, Gateway Pacific Terminal (GPT) applicant SSA Marine/Pacific International Terminals, BNSF (the railroad that would transport the coal from the Powder River Basin to GPT), coal companies, and other coal terminal interests dumped approximately $149,000 into the affiliated pro-GPT political action committees; SAVEWhatcom and Whatcom First.

SSA Marine/PIT and BNSF also contributed money ($30,000 from PIT and $10,000 from BNSF), by way of the Washington State Republican Party PAC which funneled money to the Whatcom County Republican Party, which in-turn funneled money into the coffers of, and spent money on Independent Expenditure advertising for, the four conservative County Council candidates and the two conservative Port of Bellingham Commission candidates, one of whom was Dan Robbins.

• PDC filings show that in the 2013 Port of Bellingham Commission District 1 race, Robbins received the benefit of over $2,536.08 in Independent Expenditure advertising from the Whatcom County Republican Party.

• As for support from fossil fuel interests in the 2017 election season, PDC filings, so far, show that Robbins’ campaign has received $1,000 cash contribution from oil industry giant, BP. 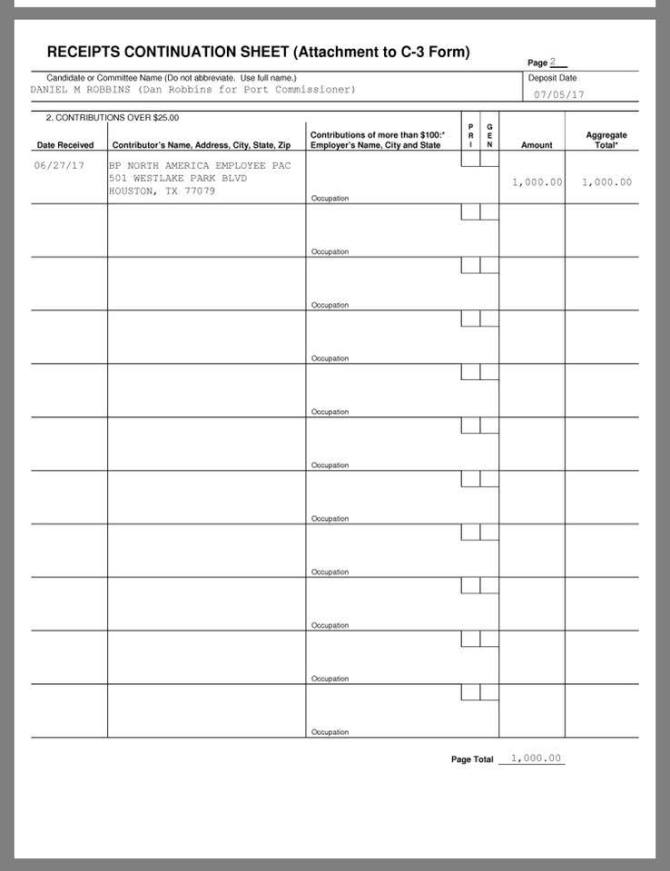