Click the Graphic to access the portion of the July 10, 2018 Whatcom County Council meeting related to appointments to the Business and Commerce Advisory Committee

On July 10, 2018 at the Whatcom County Council meeting, Council Members embarked on the muddled process of nominating and approving the applicants for the newly formed Business and Commerce Advisory Committee. The process was kicked off on a controversial note because a motion was quickly made by Council Member Byrd and seconded by Council Member Buchanan to approve two applications that had arrived after the application deadline.

Council Members Brenner and Donovan reminded the Council that it had been agreed upon at a past meeting (it was not clear if it was a regular Council or a committee meeting) that applications submitted after the deadline would not be accepted and a delay for making the appointments was suggested to open the application process up for a couple of weeks in order to be able to accept the late applications already received and others that might be submitted.

Oddly, despite the prior Council agreement and announcement that they would not take applications after the deadline, the two late applications had been included, along with all the other applications in the Council Members’ agenda packet, with a note stating, “These two applications were received before the meeting on June 19th, but after the application deadline of noon June 11, 2018.” 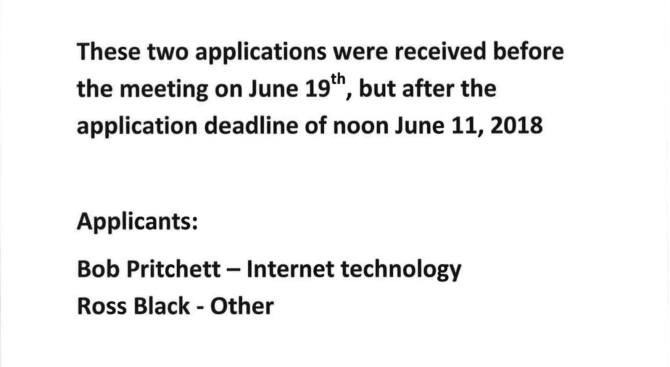 Here is a comment I had made on a post about this meeting in the Riveters Collective (a closed Facebook Group) that relates to the discussion about the late applications:

I was just starting to look at the document that Lisa posted the link to with all the applications for the Business and Commerce committee. I checked, and this is the same doc. that was in the agenda packet for the Council Members for the June 10 meeting. I noticed this note (in my screenshot) on 2nd page of the document (the first page was the agenda bill). So why, if the Council, according to Council Members Brenner and Donovan, had agreed to not accept applications after the deadline (and applicants had been told this and other late applicants were turned away), were these two applications included in with the valid applications. Who made the decision that these 2 applications (but none of the other late applications) be included along with the applications under consideration that arrived on time?

If you watch the video of the June 10 meeting (https://youtu.be/mmmTRKR5UyI?t=59m30s) , as Council Member Browne is reading the description for the next order of business (59:30) having to do with the Business and Commerce Advisory Committee, Council Member Brenner and Donovan start to raise their hands to talk. Browne asks Brenner to wait, he is still reading. But right after he is done reading the description he says “First order of business here is we need to move approval to accept two late applications,” where he turns in the opposite direction of Ms. Brenner who has her hand up again, towards Council Member Byrd, and Browne continues, “if that is the wish of the Council,” he turns to look out into the audience but in Council Member Brenner’s general direction now (he can see her in his peripheral vision) continuing “and it’s approval for consideration, not necessarily voting to appoint them.” Brenner still has her hand up, he turns, about to address her and Council Member Byrd grabs his mic and says, “Move to approve,”* and Council Member Buchanan immediately seconds.

Meanwhile, the motion to accept the two applications passed and the Council Members moved on in the choppy appointment process where it eventually came to light that there had been a letter submitted by Don Goldberg, who is the director of economic development for the Port of Bellingham with a list of recommended applicants. 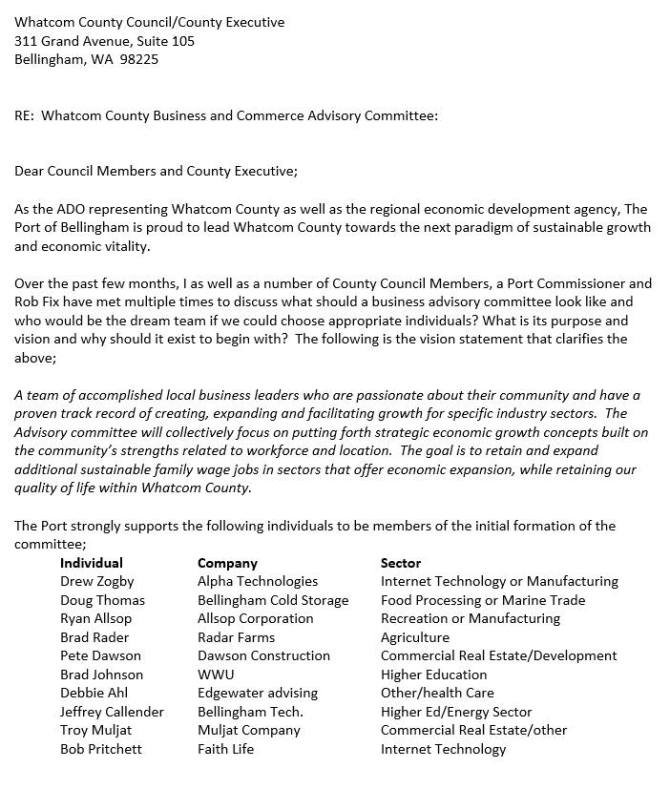 It was Council Member Sidhu at 1:11:15 on the meeting video that made an announcement about the letter:

“And I just want to add one more item that we did receive a letter from Don Goldberg, the director of economic development, Port of Bellingham, with their recommendation, because I have said several times that this committee has a dual role and one of the important role they have is the economic development portion of their responsibilities. And I would just request that please do look at recommendations from Don Goldberg while you vote.”

I would just like to remind the Council that the work on this committee being done, the principal group that will be delivering on the recommendations of this committee will be the Port of Bellingham’s Economic Development Office. And I would, I personally give heavy weight to the recommendations of the Port, as these are individuals that they believe fit well within their mission, and we need be full partners with the Port on this project.

To my knowledge this process of consulting with people at the Port of Bellingham to determine a “dream team” of potential appointments to the committee was not made known in any meaningful way to the public. I am unaware of the reasons that Port Executive Rob Fix, Economic Development Director Goldberg, and Port Commissioner Bell would have been granted this power to make recommendations for appointment to the committee. It turned out that all but two of the recommended applicants ended up being appointed to the Business and Commerce Advisory Committee. 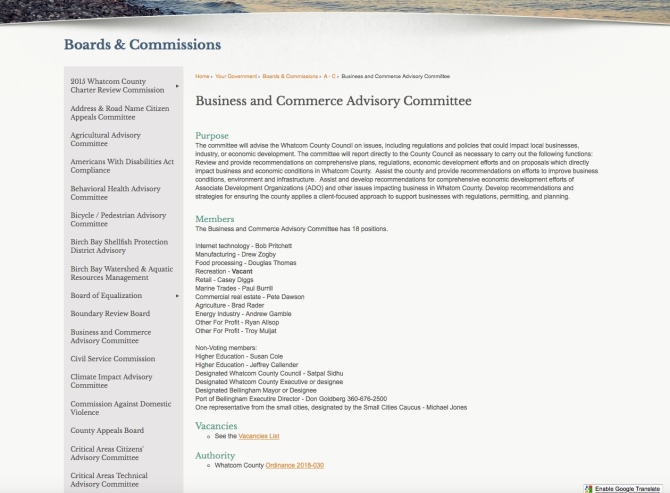 I realized it makes creepy sense, given the fact that some Council Members were giving inordinately significant weight in the appointment process to Port Executive Director Fix, Port Commissioner Bell, and the Port’s Director of Economic Development Don Goldberg, and had been in meetings with them, and this whole list of recommended “dream team” applicants had been put forward by the Port Executive, Port Commissioner Bell, and Mr. Goldberg, that the Council would then throw fairness to the wind and not extend deadlines, because there was this investment in this recommendation process that had already been made. Meanwhile the public was completely unaware that the Council was just going to offer up this power to the Port Executive, Port Commissioner Bell and – wait for it – someone who would ultimately be appointed to the committee, as well, Mr. Don Goldberg. 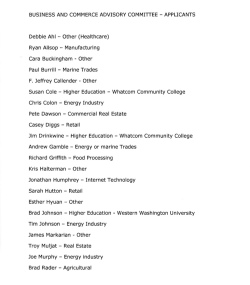 Here are my notes as the votes to approve applicants for the positions proceeded. The first category voted on was Internet Technology:

Food Processing (Vote by acclamation, only one applicant, Richard Griffith)

I would like to bring back the letter from Don Goldberg, and they went through and wrote candidates, which they not only just got the application, they really went through and vetted and discussed and these people, each one of them I don’t have enough time to talk about each one of them but they are the people who’ve been in the community for 20, 30, 40 years and they have reached a pinnacle in their own industry. They have expressed that they would like to join this committee provided their main task is economic development. And I say that because I personally did talk to several people, and all of them, and I think we should give some consideration and work from this list of the candidates which they have recommended. That’s my suggestion.

I actually agree with you. And I’ll agree with you for another reason too, is that the sectors for which they have described their applications don’t align with what we’ve got on the schedule here. For example, Doug Thomas is a very good, he’s probably the most qualified applicant related to food processing and he’s not listed as an option.

Dana Brown-Davis confirmed the categories came from the applicants not from administrative staff.
Council Members ask if it’s desired to reboot the whole process

I worked on this project several years ago to help define what these categories were with the Port. And it wasn’t the Port, it was the Port, it was the City, and the County and it was 15 executive directors from 15 different economic development groups here in the community that said, “these are the categories of industries that we have here that we have the best resources for.” And so when it comes to these, I don’t necessarily, I don’t see it as us comparing resumes per se, so much as it is finding the person that best represents that category as it was the intention of that group of 18 people at that time. And so that’s what I’m interested in doing is making sure we’re as close to that category as possible.

Council Member Brenner asks Council Member Byrd if the people two years ago coming up with categories of industries hadn’t come up with the category of construction.

We were trying to – there’s a lot of information that was coming out about, if you really want to create economic development, you should focus within a specific number of categories, and at that time Whatcom was everything. And so there was – everyone got together and sat down and defined, here’s the seven categories, I believe seven or eight categories, that we want to focus on, and then those are the list from the Port that this committee started out as. And then at that last committee meeting, I suggested that it was missing Energy and missing Agriculture that should have been added to that. So, that’s when we added two to that list of those individuals that were made. But that original list is the list that was designed that we wanted to focus economic development on in our community.

Agriculture by acclamation Brad Rader (the only applicant for Agriculture)

At this point Council Member Donovan appears to no longer feel comfortable with the process, and he abstains on the remainder of his votes.

Council Member Byrd says that he feels like Council has tried to decide on such procedures (like deciding on how to determine lengths of terms) several times in the last 6 month and he recommends providing information, “maybe up here in the front with the rules of order for how we appoint these positions moving forward, so it’s the same and not all confused and trying to figure it out.”
Council Member Browne said he would welcome a proposal from Council Member Byrd moving forward but doesn’t want to do it in the middle of this process.
Council Member Brenner said in the past they always give it to staff to do it. It seemed she was referring to the method for determining the length of the terms.
After determining the first 3 of the 4 year terms by highest number of votes received by the applicants in their category, then Council Member Byrd moves to nominate the next three 4 years term positions by the first three people in the alphabet from their last name. It passes. There was no more reference to which positions would be either 4 or 2 year terms. It seemed that Council intended that staff would complete that process.