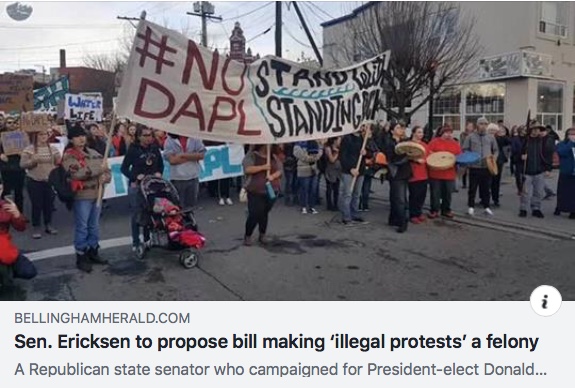 We are now at a baker’s dozen of Doug’s Got to Go posts. While we fight our way to firing Republican State Senator Doug Ericksen in the November 2018 election, here is this excellent reason for doing so.  Below is the opening of this November 2016 Bellingham Herald article. Luckily Senator Ericksen did not succeed in passing this bill that could have served to chill our first amendment rights.

“A Republican state senator who campaigned for President-elect Donald Trump said Wednesday he plans to propose a bill for the upcoming legislative session that would take a firm stand against what he calls ‘illegal protests.’

“Sen. Doug Ericksen of Ferndale said in a news release his bill would create a new crime of ‘economic terrorism’ and would allow felony prosecution of people involved in protests that block transportation and commerce, damage property, threaten jobs and put public safety at risk, he said.”

Senator Ericksen ignored that there were already laws in place for people who damage property, or obstruct transportation and commerce, plus laws to protect the safety of members of the public. In his December 22, 2016 article on Northwest Citizen, “Let the Tyranny Commence – The Revenge Against Chiara D’Angelo Bill,” Tip Johnson had written:

“I’m just going to call it Ericksen’s Perpetual Persecution of Principled Action Act – or maybe the Revenge Against Chiara D’Angelo Bill. It makes me wonder what he would have sought for participants in the Boston Tea Party – or if he just hasn’t read any American History.”

Now back to the article in the Herald, is Senator Ericksen’s pinpointing of the target of his perpetual persecution: “In an interview with the Seattle Times, Ericksen said his proposal was not spurred by anti-Trump protests, but was aimed at punishing environmentalists, tribal activists and others who have obstructed oil and coal trains, pipelines and similar projects.”