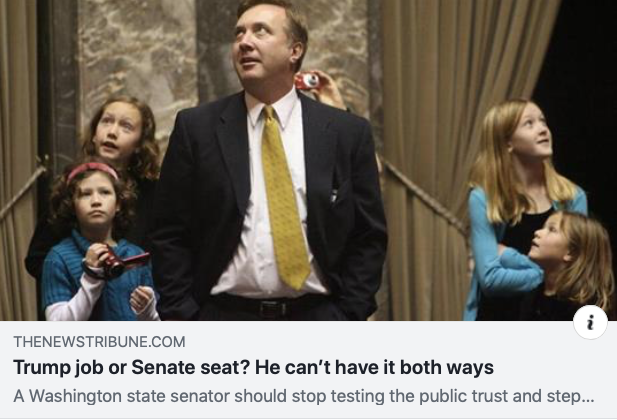 Click the graphic to access the News Tribune article, “Trump job or Senate seat? He can’t have it both ways”

Today is day 23 of posts stacking up the reasons Doug’s Got to Go before we fire Republican State Senator Doug Ericksen in November this year. Remember when we Whatcom County residents tried to fire him last year with our effort to have Senator Ericksen recalled for serving both us and the EPA poorly by holding those two demanding jobs at once?

I never saw this February 08, 2017 editorial by the editorial board of Tacoma’s News Tribune, but apparently they wanted to fire Doug too. Well, pretty much: “He should resign his elected position, and Senate Majority Leader Mark Schoesler should see to it that it happens quickly.”

The Tacoma newspaper talked about how Senator Ericksen’s two jobs were not just a problem for us constituents of his here in Whatcom County. It was explained that this was due to the fact his many absences from committee meetings in Olympia left a 24-24 tie between Republicans and Democrats in the legislature leaving the majority coalition reluctant to “push bills out for a vote.”

The following is my favorite part of the 2017 editorial though because the health and well-being of our environment is important to me and Senator Ericksen is so dramatically failing to protect that health and well-being. Here is is one telling illustration of this all tied up in his failure at the two jobs he was supposedly trying to do:

“This week, the longtime 42nd District legislator gave a bad sign that he was starting to confuse his committee’s agenda with that of his new employer.

“Ericksen invited Tony Heller, a mouthpiece for the national climate-change-denial movement, to give a presentation at the start of a committee meeting Tuesday. Speaking remotely by phone from D.C., Ericksen gave a warm introduction to Heller, who then spent 40 minutes rattling off piecemeal bits of data, building to his widely discredited conclusion that human-caused global warming is a myth. (Trump has also scoffed at climate change, calling it a Chinese hoax.)

“At the end, true to form, Ericksen had checked out and was no longer on the line.

“The ranking Democrat on the committee, Sen. Reuven Carlyle of Seattle, described it as an ‘uncomfortable, awkward and embarrassing presentation.’

“What’s worse, Ericksen’s out-of-state duties seem to be causing him to lose touch with in-state environmental priorities. Carlyle noted bills have stalled in committee addressing concerns such as cleaning up Puget Sound and meeting water needs in the Yakima Valley.”