In looking at this combined information it seems clear that contrary to the fact that Whatcom County Sheriff Bill Elfo had said back in July of 2017 that the Sheriff would continue to say no to Federal mandates to make the Sheriff comply with immigration enforcement, by virtue of the fact that the Sheriff’s Office is receiving Operation Stonegarden funds they have agreed “to enhance cooperation and coordination among local, tribal, territorial, state, and federal law enforcement agencies in a joint mission to secure the borders of the United States.”

In Rosalinda Guillen’s post today on the Keep Bellingham Families Working Facebook page, she provided information regarding community group’s opposition, which included opposition from Community to Community Development, to the Whatcom County Council approving the Sheriff’s Office being granted such funds:

It is outrageous that Whatcom County on the Northern Border – one of the longest most peaceful borders in the Americas continues collaborating with Homeland Security by accepting funding using the StoneGarden program. When Sheriff Elfo first presented his proposal to the County Council, C2C was there along with other community groups vigorously opposing it. As usual the Council members sat stone faced and signed off approving the Sheriff’s request, after a few questions about using the funding to detain community members, the Sheriff said that is not what the funding would be used for.

1) we did not trust the Sheriff’s Office, that this grant would be used to further develop the already existing and dangerous good old boy relationship among local law enforcement agencies in Whatcom County that were mostly targeting people of color and undocumented farm workers.

2) we believed the funding would be used to militarize the County Sheriff’s operations to possibly at some point act against Whatcom County citizens protesting local and federal government and to further collaborate with I.C.E.

IF Pima County, which is at the epicenter of the debate around Homeland Security’s fascist treatment of brown, Latino people, on the most militarized part of the Southern Border, is refusing these funds,

then we demand that Whatcom County also refuse to cooperate and immediately pull out of this program. SHERIFF ELFO STOP ACCEPTING FUNDING FROM HOMELAND SECURITY! STOP MILITARIZING THE LOCAL SHERIFF’S OFFICE! STOP COLLABORATING WITH I.C.E.!!

Recently, one of the Whatcom County Council members said our County receives Operation Stonegarden grant funding which is the type of grant funding referenced in the Sept. 7, 2018 “Daily Kos” article.

Doing a quick online search, I was able to see that according to a July 2012 Whatcom Watch “Watching Government” report, at a May 2012 County Council meeting, the Council approved (6-0) the following:

“Authorize the executive to accept a $757,963 federal grant to enhance law enforcement along the U.S. border? This is the 4th U.S. Department of Homeland Security/Operation Stonegarden grant for overtime, milage and purchase of equipment. The four grant total is $3,701,358. Also participating are police departments in Blaine, Everson, Ferndale, Lynden and Sumas. The grant runs from 9/1/2011 through 6/30/2014. (AB3012-175) Approved 6-0, Pete Kremen was out of the room.”

On Monday, Sept. 17, 2018, I sent an email inquiry with several questions about Operation Stonegarden grants to Whatcom County Undersheriff Jeff Parks. He responded that same afternoon. Below, are two of his responses to two of my questions:

2) When is the end date for the most recent Stonegarden grant that was approved by the County?

3) When was the most recent application made/submitted for any Stonegarden grant funding for Whatcom County?

Here is a link to the July 2012 Whatcom Watch report: http://www.whatcomwatch.org/php/WW_open.php?id=1448

I did my own search on the Whatcom County website to see if I could find a copy of the contract for the Operation Stonegarden Grant to find out what types of requirements are stipulated in that agreement. And while I did not find that contract, I did find a copy of a March 26, 2018 memo sent by Whatcom County Sheriff Bill Elfo to Whatcom Executive Jack Louws regarding the Operation Stonegarden Grant, to which was attached the Supplemental Budget Request for the grant. These documents were on pages 9, 10, and 11 of Whatcom County Agenda Bill #2018-127. 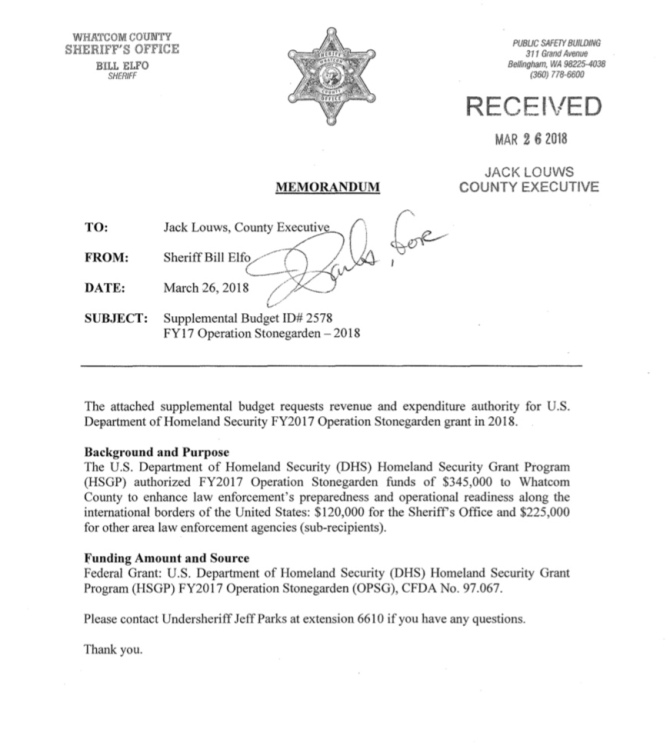 In the first paragraph of the March 26, 2018 Supplemental Budget Request ID# 2578 it states in the “Description of request”:

The U.S. Department of Homeland Security (DHS) Federal Emergency Management Agency (FEMA) awarded $345,000 to Whatcom County for Operation Stonegarden Grant Program (OPSG) FY2017. These funds are awarded to enhance cooperation and coordination among local, tribal, territorial, state, and federal law enforcement agencies in a joint mission to secure the borders of the United States. The Sheriff’s Office will use the allocation as follows: $64,400 for overtime, $48,000 for equipment, $7,600 for mileage, and $225,000 for sub-recipients.

The Whatcom County Sheriff’s Office and other law enforcement agencies will use OPSG funding to provide enhanced patrols to increase law enforcement presence in maritime and land based order areas targeting illicit activity in Whatcom County, specifically the cross-border smuggling of aliens, weapons, currency, and narcotics.

So, even though Sheriff Elfo has maintained his office would continue to say no to Federal mandates to make the Sheriff comply with immigration enforcement, since the office has been availing itself of this grant money, his office is – under the expectations of the grant – actively cooperating with Border Patrol and the Department of Homeland security regarding the the activities of “undocumented aliens.”

Meanwhile, here is a link to a copy of “Sheriff Elfo’s Letter To Citizens Regarding Cooperation With DHS-ICE” from March 30, 2017 with his statement on some of the ways that the Sheriff’s Office cooperates with Immigration and Customs Enforcement: http://www.whatcomcountysheriff.org/2017/03/30/sheriff-elfos-letter-citizens-regarding-cooperation-dhs-ice/

However, as the post in the Daily Kos indicates, other border towns are choosing to no longer tolerate the collaboration between the Department of Homeland Security and law enforcement due to the inhumane practices and objectives of ICE. From a linked article to the Arizona Daily Star:

“I worry about the sheriffs, I want to support them,” [Pima County Supervisor Richard] Elías told the Star on Thursday. “I want people to believe that (the deputies) are on their side.”

By accepting Stonegarden funding and allowing ICE representatives into the jail, Elías worries that the Sheriff’s Department is hurting its credibility with the public.

“We ultimately can’t control the Sheriff’s Department, but we can try to ensure that they’re acting in the best interest of everyone living here,” Elías said.

Meanwhile here in Washington state there was a resolution to abolish ICE passed on September 16, 2018 by the Washington State Democrats Central Committee: