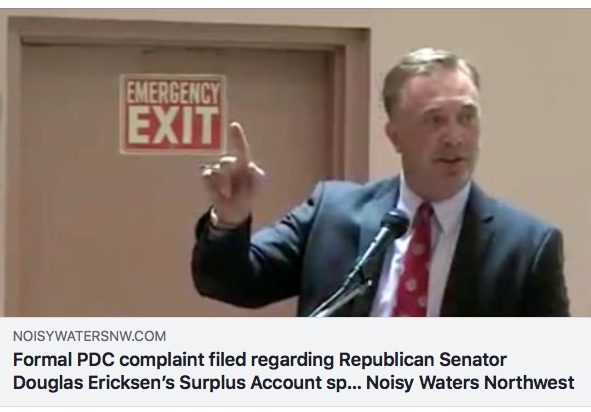 On the 15th day of Doug’s Got to Go posts it is important to recall that a PDC complaint (which is still being assessed by the PDC) was filed on Republican Senator Doug Ericksen at the beginning of this year for potential violations of campaign spending laws related to his extra job with the EPA at which the senator worked in 2017.

From the March 6, 2018 press release linked to in this post:

“Using surplus funds for expenses related to obtaining and/or maintaining personal employment with the EPA would not be considered an appropriate use of those surplus funds. Cash Receipts and Expenditure reports filed with the PDC by Senator Ericksen’s ‘Douglas J. Ericksen (Committee to Elect Doug Ericksen Surplus Account)’ indicate that in November 2017, there were listed expenses totaling over $1,300 for Washington D.C. travel-related expenses. The expenses appear to be related to Ericksen’s meeting/s with EPA and/or White House officials to discuss and procure potential personal employment with the EPA. This would not likely be considered a legitimate public office-related activity.”

Click through to the press release for some alarming details about Senator Ericksen’s claims about his trips to Washington D.C.